Republicans have (again) violated the values they say they stand for. After 8 years of railing against Obama and the Democrats for reckless spending, they now have done the same with a 2-year spending bill that increases the deficit by $300 billion dollars. The solution is straightforward, just abolish the Federal Reserve who allows this irresponsible behavior.

“But what country in today’s world doesn’t operate without a central bank?”

Panama has no central bank. There are two nationally owned banks but they neither act as a lender of last resort nor do they control the money supply or set interest rates. It’s been like this since the most southern Central American nation first gained independence. In fact, it was written in their first constitution of 1904 that:

There will be no forced fiat paper currency in the Republic. Thus, any individual can reject any note that he may deem untrustworthy.

The US dollar, however, has remained the de facto legal tender. But it’s not just the absence of a central bank that makes Panama significant, the small nation passed sweeping reforms to the finance and banking industry in 1971 that got rid of taxes on interest or transactions generated in the financial system or profits from abroad. Consequently, the number of banks jumped from 23 in 1970 to 125 in 1983.¹ 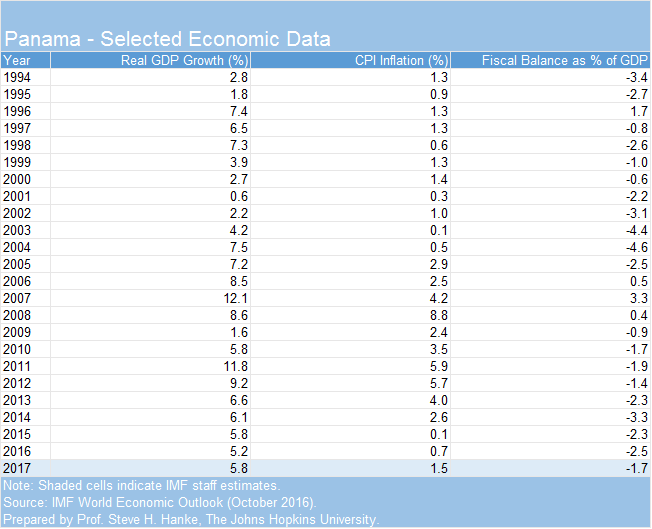 The economic effects have also been astounding. The country is one of the most developed in Latin America, boasting consistently high GDP growth. Not only that, in the absence of a central bank, Panama has never experienced a banking or financial crisis and was actually insulated from the Great Recession and the Asian Financial Crisis. This is also in spite of the fact that Panama doesn’t even have a deposit insurance agency like the FDIC!

Banks cannot coordinate inflation due to ample competition and the fact that (unlike even the United States banking system prior to the Federal Reserve) they do not issue bank notes. The panics and general bank runs that were so common in the US banking system in the 19th century have not occurred in Panama, and bank failures do not spread to other banks. Several banks in trouble have been bought — before any runs ensue — by larger banks, attracted by the profits that can be made from obtaining assets at a discount.²

It should also be noted that the lack of a central bank has forced the Panamian government to maintain sound fiscal policy. Unlike most countries who can just use their central banks to monetize their debt allowing themselves to incur huge deficits, Panama has no such tool.

Fiscal policy has little room to maneuver since the treasury cannot monetize its deficit. Plus, fiscal policy does not influence the money supply; if the government tries to raise the money supply during a contraction period by obtaining debt in international markets and pumping it into the system, the banks compensate and take the excess money out of circulation by sending it offshore.4

Since Panama’s fiscal authorities can’t borrow from a central bank, the fiscal accounts face a “hard” budget constraint dictated by the bond markets. In consequence, fiscal discipline is imposed and since 1994, Panama’s fiscal deficit as percent of GDP has averaged 1.7% per year.5

View all posts by Victor Gamble