Growing anxiety from a nuclear and hostile North Korea has had the Pentagon up their defense from a potential nuclear attack.

The US Military successfully shot down an intercontinental-range missile for the first time in a test early Tuesday afternoon. The goal was to more closely simulate a North Korean ICBM aimed at the U.S. homeland, officials said Friday

But moments like this haven’t always been the norm. As the AP reports:

The American interceptor has a spotty track record, succeeding in nine of 17 attempts against missiles of less-than-intercontinental range since 1999. The most recent test, in June 2014, was a success, but that followed three straight failures. The system has evolved from the multibillion-dollar effort triggered by President Ronald Reagan’s 1983 push for a “Star Wars” solution to ballistic missile threats during the Cold War — when the Soviet Union was the only major worry.

The test came just two days after the DPRK fired a short-range ballistic missile that traveled an estimated 248 miles, touching down within Japanese waters.

The Pentagon insists the long-planned test of its ground-based interceptor system is not solely about North Korea, and the test is aimed at being able to challenge any threatening ICBM, including possibly from Iran in the future.

That test involves firing a new version of the military’s single long-range ground-based interceptor missile, which is currently based in Alaska and California 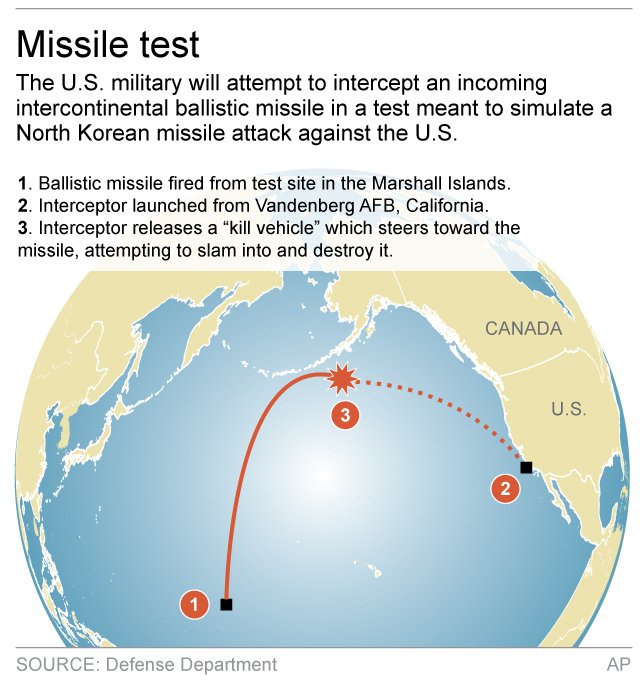