A constitutional referendum was held throughout Turkey on 16 April 2017, on whether to approve 18 proposed amendments to the Turkish constitution that were brought forward by the governing Justice and Development Party and the Nationalist Movement Party. Now that the Turkish president Erdogan claimed victory, the office of the Prime Minister is expected to be abolished and the existing parliamentary system of government will be replaced with an executive presidency and a presidential system. The number of seats in Parliament is to be raised from 550 to 600 while the president will be given more control over appointments to the Supreme Board of Judges and Prosecutors. The referendum was held under a state of emergency that was declared following a failed military coup attempt in July 2016. The model that has passed with the referendum, as reported by the Independent, lacks the safety mechanisms of checks and balances, giving the president a more “autocratic regime”. It will, as well, most likely extend his mandate up to 2029. The changes would include:

Erdogan’s track record of imprisoning and silencing dissidents makes a mockery of the electoral system, which may be about to give him unprecedented power. The little light of “democracy” left in Turkey could be extinguished for a long time if the referendum fully passes, the final results of which, are expected to come in 11-12 days.

“If I was really a dictator,” Erdogan once said about two years ago in response to the criticism against his authoritarian tilt. “You wouldn`t be able to say all this.”
Two days after that quote, his party lost the majority in the parliament for the first time since 2002. Blaming the media, Recep Tayyip Erdogan practically forced re-election in November, which he won. Then came the big fire against the media. As the Al-Monitor reports, “In the run-up to the November polls, stick-wielding and stone-throwing AKP (Erdogan`s party) supporters attacked the Hurriyet daily in Istanbul on Sept. 7. The police chose not to intervene as the mob — led by newly elected AKP deputy Abdurrahim Boynukalin, the head of the party’s youth branches — shattered the glass entrance and windows of Turkey’s largest media group. Less than 24 hours later, the building came under a second attack, along with Hurriyet offices in Ankara.”

Since the failed coup, Erdogan has gone on a “media crusade”, arresting journalists, and closing media outlets which ran stories against him. Independent media has been silenced, and Turkey`s population has been denied access to a regular flow of independent information. 148 journalists and media workers were arrested, and 169 media publishing outlets have been shut down, showing how Turkey is deliberately flouting basic principles of human rights and rule of law central to democracy. This makes Erdogan`s statement on Europe, accusing them of “Nazi practices”, ever so ironic.

Although Erdogan supporters praise him, hailing him as a strong man who`s going to make their country great again, those who are against the proposed amendments fear the changes will turn the position of the President into a virtual dictator. As is always the case with big government interventions on almost all aspects of a person`s life; maybe Erdogan will not end up a dictator, but can the same be said to the one after him.
With the way, things have been going since Erdogan became a prominent name in politics, I am sure we should not worry about his predecessor until Erdogan`s presidential mandate ends; and who knows how long that`ll take.

Major Turkish cities like Ankara, Istanbul, and Izmir, have voted no. Those in larger cities seem to realize that the referendum is a consolidation of power at behest of Erdogan after a potentially false coup that may change Turkey from a Western-leaning, previously fairly secular democracy; to a virtual dictatorship under the leadership of an all-powerful political party with its head, an Islamist, that has been rapidly altering laws within the country to move towards a religiously based dictatorial system. Sadly enough, their vote didn`t seem to be enough to tip the overall result.

But it doesn`t end here since claims of voter fraud have been circulating the web and media by the opposition parties. Videos are being spread around, showing cases of individuals stamping several ballots “yes”, or another one that appears to show a voter emerging from his booth, then putting five envelopes into the ballot box. [x] 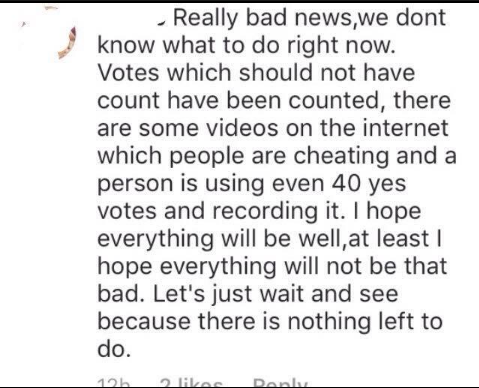 In another case, we see a pro-government journalist, who is known for criticizing the media, threatens TV stations on their cover of suspected voter fraud.  Opposition parties complained of a number of irregularities in the voting and were particularly incensed by an electoral board decision announced Sunday afternoon to accept as valid ballots that did not bear the official stamp.

During his speech after he claimed victory, Recep Tayyip Erdogan talked about the death penalty. He said how he will immediately discuss bringing back capital punishment, and that the resumption of it could be brought to another referendum. [x]

Writer, activist, volunteer at Termokiss; Editor in Chief of the Termokiss blog. View all posts by Argnes Ah.