Politics in entertainment? Sure, why not; I mean, politics are among the core influences on a person`s life. But it can be done wrong, and who can prove it better than Marvel Comics. Outright submitting to a specific political ideology, while constantly misrepresenting, and purposefully misinterpreting the other side has become a norm. I mean, Donal Trump is M.O.D.O.K. for crying out loud (and it is a little funny). But what effect does that have on the sales? Bad ones, and as Donald Trump would say:
“Sad!”
But what makes me more uncomfortable what the heads at Marvel are attributing this massive drop on sales to. According to this article, the “reason” for this downward spiral is that “people do not want diversity in comics”.

“What we heard was that people didn’t want any more diversity. They didn’t want female characters out there. That’s what we heard, whether we believe that or not.  I don’t know that that’s really true, but that’s what we saw in sales,” is the answer that the Direct Market retailer David Gabriel gave. “We saw the sales of any character that was diverse, any character that was new, our female characters, anything that was not a core Marvel character, people were turning their nose up against.”

Now, is diversity to blame, not only for the fall on comic sales, but for the undeniable drop in quality? Not really. I mean, look at Rebirth; there`s a chinese Super-Man, a duo of Green Lanterns, one being Middle Eastern, and a lot more characters who come from different backgrounds. Racism or sexism definitely is not the problem here.
Why did it work for DC?  I am not going to say that DC did not pander to the same ideology that Marvel did (Green Arrow is a socialist, self proclaimed “social justice warrior”), but at least they do one thing right. And that is: putting story and character before identity. I am a huge MCU fan, so when I got into comics I was understandably let down. I am a bit biased towards DC, but this is precisely the reason why. DC has a diverse roster, both heroes and villains. But they have that which is more important for a comic book, they have compelling characters, and great stories. That is what Marvel has been lacking. They aren`t failing because of diversity per se, but because the characters aren`t compelling, and the stories are boring. Have a team made up of completely female superheroes? Perfectly fine; in fact, I`m all for it! But why isn`t it working for Marvel? Because the said team only exists for the purpose of being all-female. If the entire story is gonna be like:

“Look at us! We`re women, and we are doing stuff!”

Yeah, not hard to see why it fails. Women have been in comic books for a long time now, and the idea of women being strong and independent isn`t new. But things like this? 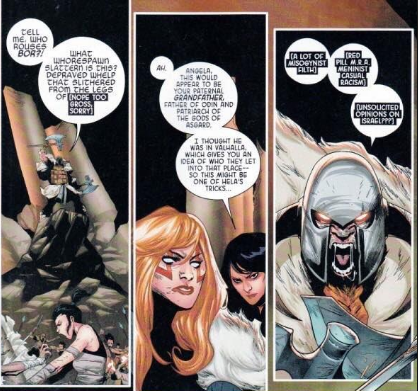 Look, I am a writer. In order for the book I write to be as appealing and fun to read, there`s this rule that all writers must abide to. It`s like our Ten Commandments, except it`s only one commandment.  Show, Don`t tell! To whomever wrote that comic from which I got the panels, that is a lot of telling, and an amateurish attempt to censor what was not needed to be there in the first place.

To conclude, Marvel doesn`t have much going on right now. Captain America: Steve Rogers is my favorite (cause it`s the only one I read from them as of now), and Unworthy Thor was really entertaining. This is not to say that they don`t have other good or great titles. The Mighty Thor is still okay, and except the “she`s a woman”, I have failed to find a decent complaint about the comic story-wise. Same thing with Miles Morales (except that there are not many who hate this guy, he`s awesome!)
Diversity isn`t ruining Marvel, since DC is doing pretty good even though it is pretty diverse. It is diversity for the sole sake of diversity, focusing on identity politics, and pandering to a demographic that isn`t interested in buying comic books. Overall, it`s just overused oversized mega events which don`t make for interesting stories anymore, and flat characters.

This video gives more detail to points I didn`t make here, from the perspective of a comic book fan without the influence of political opinion.

2 thoughts on “Leftist pandering, NOT diversity. The real problem with comic books”

Writer, activist, volunteer at Termokiss; Editor in Chief of the Termokiss blog. View all posts by Argnes Ah.