In three days President Donald Trump took a large step towards recovering all the American credibility lost by former President Barack Obama four years ago during the 2013 Syrian chemical weapon attacks. As Trump said, there can be no doubt that this was done by Syrian dictator Bashar Al-Assad. In response, the United States launched fifty-nine cruise missiles attack the Syrian air base used to launch the chemical weapons attack. The only questions are should anything be done? What should be done? What effect would it have? And what should not be done? 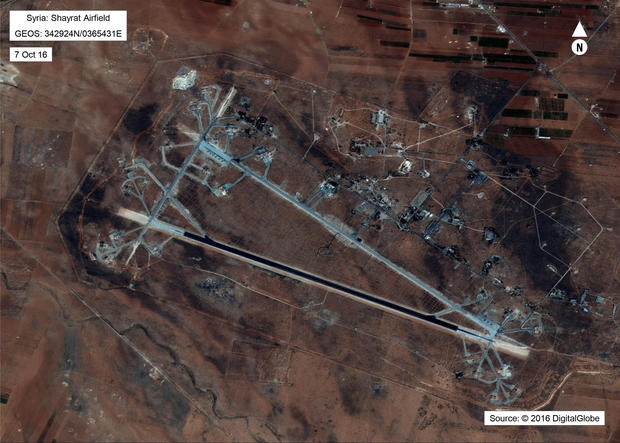 Shayrat Airfield, 59 cruise missiles were launched from two American Naval destroyers in the Mediterranean to attack it

Should something be done? Yes. While I normally think morality should be separated from foreign policy there has to be a line drawn. Chemical weapons and other Weapons of Mass Destruction should not be on the table. Not only are they morally evil it is in the United States national security interests to minimize their existence and use. This action would also retake American credibility lost by the Syrian debacle lost under Obama. Finally, Syria agreed to give up certain chemical weapons and they not only failed to but used those weapons. A response had to be made to maintain credibility.

What should be done? The United States should do what was done tonight but expand it. Instead of attacking the one base involve it should target all of the remaining five bases that do not have Russian soldiers stationed there. For those that do, then the US should effectively create a no-fly zone for Syrian aircraft by targeting them when they take off. Secondly, the United States should arm American backed Syrian-rebel allies with anti-tank missiles, anti-air missiles, and intelligence to push back Assad and give them more leverage in peace talks. In theses peace talks the United States should push for Assad to cede power to someone like a former regime leader who defected to the rebels and can unify religious minorities while we also protect religious minorities. We should also fund refugee camps. Lastly, we should double our efforts against ISIS to take away the political legitimacy of Assad. For all these actions, Trump should build a mass coalition between the United States, Great Britain, Germany, France, Canada, Jordan, Israel, Iraq, Saudi Arabia, Egypt, the United Arab Emirates, Qatar, and anyone else who will join.

What should not have been done? For starters, the United States should not deploy ground elements in response to the chemical weapons. Secondly, we should not establish a blanket no-fly zone or use American soldiers to secure refugee camps. Putting up and enforcing a no-fly zone in a region where aircraft are active either means you have to shot them down or hope they back down. Given the boldness and pride of Russia, the former option seems more likely. This is a reckless plan to start a conflict. While I support funding refugee camps it would take too many men and lives to maintain the refugee camps with American soldiers.

Will this work? I do not think so. It appears this was only one strike and I fear that the Syrian dictator will take this as a swing and a miss and be emboldened. He might not go straight back to sarin gas attacks but I think he will do marginal attacks like barrel bombs and chlorine gas.

Another question that I want to touch on it Congressional authorization. Would Donald Trump need it? I think he would and he should have gotten it regardless but there are arguments on both sides and I will leave it at that.

Last night, in terms of international relations, Donald Trump avenged the Syrian civilians slaughtered by Bashar Al-Assad and restored American credibility. I hope a sensible foreign policy grounded in realism but with moral awareness can be followed. While military action is a worst case scenario this was a worst case scenario. In the end, this was Good Trump.