This is part of a series of articles making short arguing for or against certain policy proposals.

Before I begin my affirmative case let me argue against two popular critiques. In the fifty-seven elections since the United States first elected a President, there have only been five occasions when the popular vote differed from the electoral college– only two since 1900. This should be no surprise since the distribution of electors is almost entirely based on population, one for each Representative plus two for Senators. As you look at the maps below which is cartogram (a map on which statistical information is shown in diagrammatic form) of electoral votes and which is of the population? 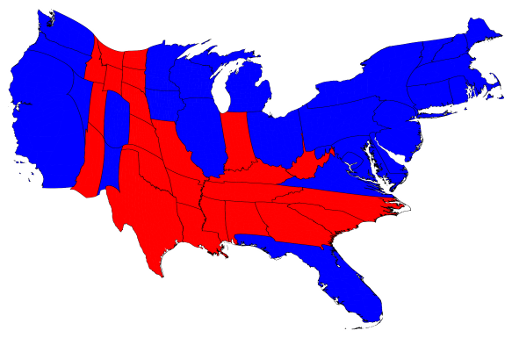 Almost identical? Right? It is almost impossible to distinguish the top one (population) from the bottom one (electoral votes) without close examination. While there is a slight bias towards small states, it is only that, slight. So slight that it almost never changes the result of an election.

But what about direct democracy? Should we not strive for that as the leader of the free and democratic world? No. We should be careful to protect the minority while also allowing for the will of the people. Why should the country be ruled by California (a state which itself ignores half a million people in its state government.) or any one of five states in the 2000 election? I support a system of factions checking each other and where broad coalitions need to be built to a system where factions can easily take control. This is the contradiction the opponents of the electoral college need to answer, why is being ruled by population density so much better than letting elections be decided by states which will often be the middle of the country? Clustering millions of votes in one bay or island makes them infinitely more valuable than the same amount of votes spread out through multiple states. We can have a discussion and debate on the merits of the electoral college (I personally want states to reform it to a proportional system) but can we not pretend that a straight democratic vote is much “fairer”? All we would do is trade states for cities.

The United States is a federalist system in which the federal government and states share power and in each level, power is distributed among different branches. In a system where states create the federal government, why should states not decide? As I mentioned above, I prefer a system of factions checking each other and where broad coalitions need to be built to a system where factions can easily take control. In the 2016 election, Donald Trump HAD to flip states that President Obama won twice to win the election. He had to get people who supported Obama. In 2008 President Obama HAD to win states Bush won in 2004 and in 2000, Bush had to win at least five states that Bill Clinton won eight years earlier. People often say that the 2000 election was won by Bush because of Florida but Bush really won because he flipped West Virginia which put him over 270. Florida had gone red just eight years earlier in 1992 but West Virginia had been a solid blue state since before President Franklin Delano Roosevelt and had only gone for Republicans in national landslides.

It is often said that democracy is two wolves and a sheep voting for who is dinner and that is true and the purer the democracy the truer that statement gets. While I have to concede that even my preferred system suffers from this flaw so does any other system where free people can have a say in their government. The question is how do we mitigate this? President Trump was elected because of a combination of at least two states which voted for the opposite party twice or Hillary could have won because of the Bay Area, Los Angeles, and New York City. I know which I prefer.