Last night senators Ted Cruz (R-TX) and Bernie Sanders (D-VT) had a debate over the future of health care. Here are 5 quick essential things you need to know to beat Bernie Sanders in a healthcare debate:

1) America spends more on health care per capita than any other OECD country.

According to a 2014 report by WHO, the US spends $9,400 in total health expenditures per capita. 48% are government expenditures.

2) A commonly cited report that slam American health care as the worst have a socialist bias.

This is Commonwealth fund consistently slams America as having the worst health care system in the world. We probably rank highly up there but as economist David Henderson points out, there are still some interesting advantages America has over the other single pay systems:

Greg Scandal also has a more in depth look at the distorted data in the organizations publication. Does this mean that America has better health care? At best in certain things we are but overall no.
3) Our health care infrastructure is actually pretty good.

According to the OECD, it’s actually the British NHS (the closest system to actual socialist medicine among Western countries) that ranks as the worst. A lot of it has to do with health infrastructure where America actually does pretty well in. Here’s a graphical representation: 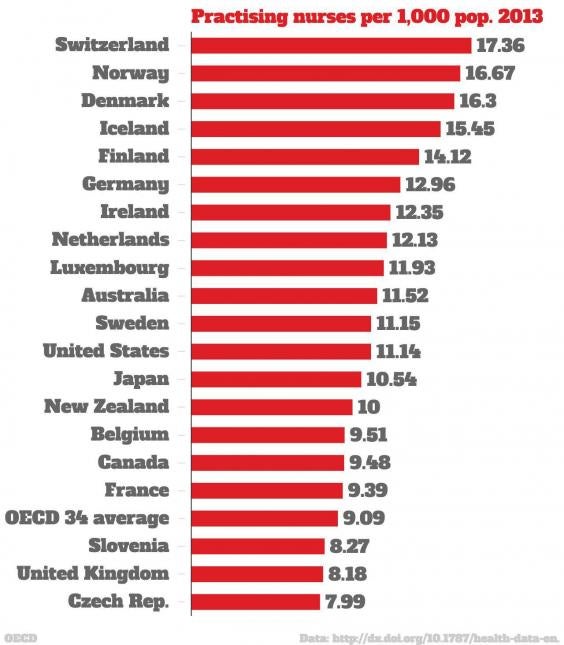 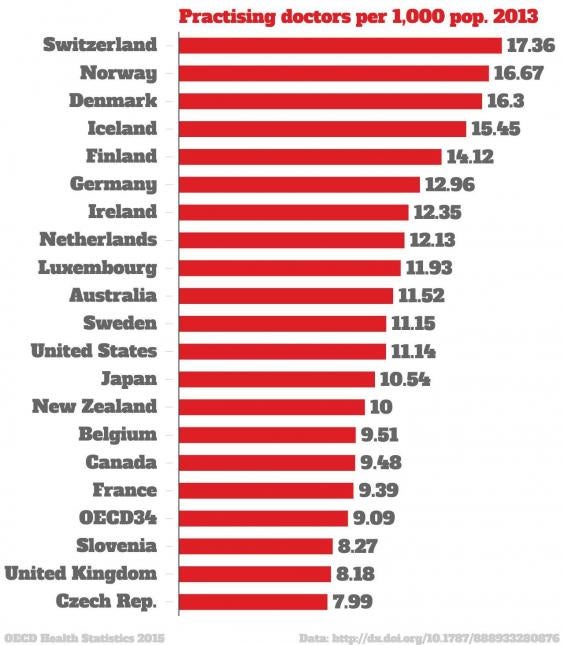 The United States has above average nurses and doctors per 1,000 person and is above Canda and the UK as well. In fact the UK ranks second to last in both, beat only by the Czech Republic

4) Why is health care so expensive?

A lot of factors but how much of an impact it has on costs is subject to debate. But here are the two main ones, both equally valid:

The first reason is mainly argued by people on the right while the latter is argued by those on the left. Regardless both are valid arguments and most likely the top two drivers of health care costs.

5) What are some proposed solutions?

Arnold Kling believes we should scrap the “cover all” system and leave insurance to cover only emergencies. Some fellow CATO scholars disagree and actually point towards a more universal health care system as a solution. Matthew Holt and Clark Havigurst argue specifically for a managed competition model where: “There is compulsory membership in universal national or regional pools, and in which providers supply pre-paid care, complete with global pricing for a set of clearly defined services.”

Economists Ezekiel J. Emanuel and Victor R. Fuchs at the centrist Brookings Institute propose a universal heath care voucher plan that they describe will “entitle all Americans to a standard package of benefits comparable to that received by federal employees. Enrollment and renewal are guaranteed regardless of health status, as is the individual’s right to buy additional services beyond the standard benefits with after-tax dollars” and “[offer] true universality, individual choice, effective cost control, and competition based on quality of care and service.”

Avik Roy at the conservative leaning Manhattan Institute proposes a Universal Exchange plan that would try to fix Obamacare. Accordingly, the plan provides generous means-tested subsidies to buy health insurance. But it moves towards a system that combines catastrophic plans to cover expensive health emergencies and health savings accounts (HSAs) for routine health costs. It also gradually transfers most Medicaid recipients into the private insurance market (with the aforementioned subsidies). Lastly, the plan does away with the individual mandate and some of the requirements and regulations Obamacare imposed on insurers and insurance plans, the latter of which Roy argues would decrease the cost of health insurance and, thus, increase the enrollment of young, healthy people.