Skip to content
Posted on February 1, 2017 by Michael Carmichael

In 2017 the best way to prove me wrong was for Donald Trump to immortalize the late, great Justice Antonin Scalia by nominating a textualist and originalist to the Supreme Court. Today, he did just that. Not only did he nominate someone that matches the caliber of Justice Scalia but someone who surpasses him.
Donald Trump, thank you for nominating Neil Gorsuch to the United States Supreme Court. I have never been more happy to be so wrong.
Let me first praise his likeness with Justice Scalia by quoting SCOTUSblog. “He is an ardent textualist (like Scalia); he believes criminal laws should be clear and interpreted in favor of defendants even if that hurts government prosecutions (like Scalia); he is skeptical of efforts to purge religious expression from public spaces (like Scalia); he is highly dubious of legislative history (like Scalia); and he is less than enamored of the dormant commerce clause (like Scalia). In fact, some of the parallels can be downright eerie.”
As FiveThirtyEight pointed out, Gorsuch would be more conservative than Scalia but less so than Justice Clarence Thomas. 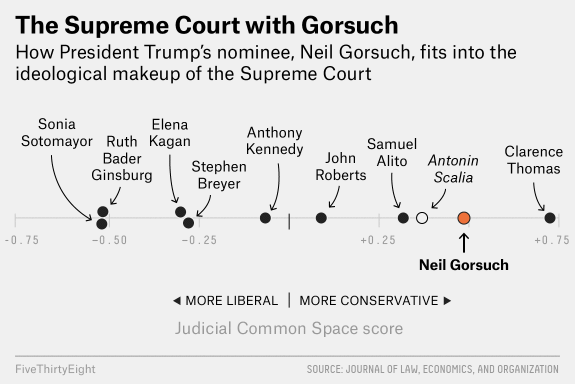 As similar as Judge Gorsuch is to Justice Scalia he does have one major advantage over him. The Chevron rule. For those of you who do not know, the Chevron Rule. The Chevron rule comes from the 1984 case Chevron U.S.A., Inc v. NRDC in which the court rules to give deference to administrative agencies in interpreting law. While Scalia wrongly defended this doctrine, Gorsuch does not. Gorsuch once noted, “We managed to live with the administrative state before Chevron. We could do it again.” Just last year he blasted the doctrine as, “judge-made doctrine for the abdication of the judicial duty.”