1. Jesus is based on Horus or some other pagan god 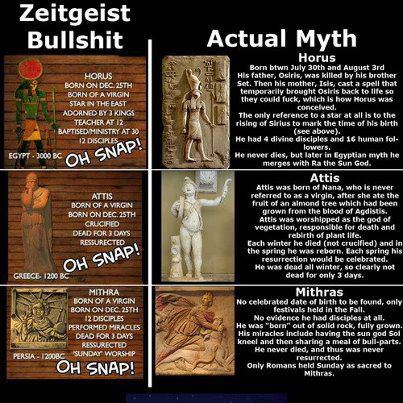 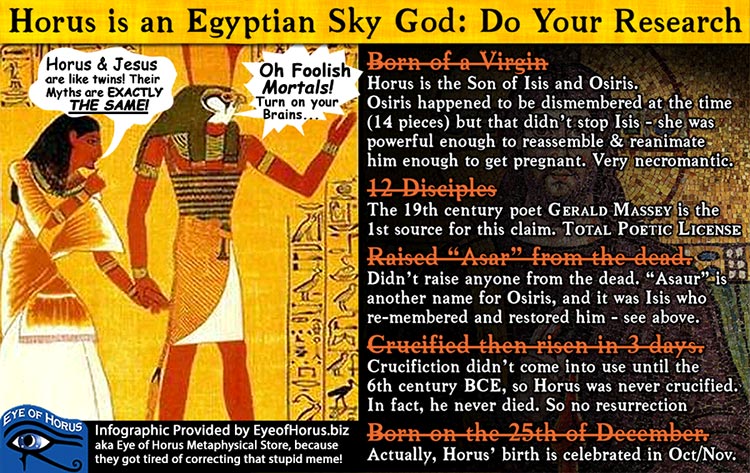 Bart Ehrman, an actual historian with actual credentials at the University of North Carolina, described the main book advocating this theory as “the breathless conspirator’s dream” and “all of Acharya’s major points are in fact wrong” and that her book “is filled with so many factual errors and outlandish assertions that it is hard to believe the author is serious.” He proceeded to slam her saying, “Mythicists of this ilk should not be surprised that their views are not taken seriously by real scholars, mentioned by experts in the field, or even read by them.”
You can read more about this here.

There is a 99.7% or 345/365 chance that Christ was NOT born on December 25. This date could be completely arbitrary. It is not known why it is celebrated on this date. It could be because the Winter Solstice (not for Pagan reasons as we will see below) is nearby and after the Solstice the days get longer, which would create a powerful religious parallel.

3. Christmas is a pagan holiday and celebrates the winter solstice

While we don’t know why Christmas is on December 25, we do know that this is a baseless claim which seems to originate in the 12th century and is circulated around atheist circles on the internet. Ironically, early Christians did not celebrate Christ’s birth because they thought birthdays were pagan. For a really good article on this topic, read this piece written by Andrew McGowan, Anglican Priest, and historian.

4. The Christmas Tree is Pagan and that means Christmas is pagan

The tradition of the modern Christmas tree began in the 17th century, well after the fall of paganism. However, it probably has some roots in pagan tradition. Now, to be clear, this does not mean Christmas is pagan. Adopting traditions from X into Y does not mean Y is actually X.

Can we stop pretending there are other important holidays around Christmas? Hanukkah is not actually that important of a religious holiday, and Kwanzaa was made up in the late 1960s by black nationalists. With the exception of Pearl Harbor, December 7, and New Year’s (Eve) there are not any other major holidays in December. Furthermore, New Year’s is often added behind Christmas in Merry Christmas anyways.

6. The War on Christmas is a myth

This comes down to your view of the left. If you believe the left in engaging in a perpetual revolution to destroy any concepts of absolutism (like Christianity), then you believe in a War on Christmas. If you foolishly believe the left is not in a perpetual revolution to destroy all concepts of absolutism then you find this foolish. It is as simple as that, but I would contend it to be more accurately called a War on Christianity or Judeo-Christian values.

7. The Gospels are inaccurate because the chronology of the birth of Jesus, the reign of Herod, and the census are off.

Historians place the birth of Jesus of Nazareth at around 6 to 4 BC, which is during the reign of Herod. So far so good, but the problem comes when you add the census. There is no definitive answer to this question and could very well be a mistake in terms of historical accuracy.
For the Catholic apologist, perspective see this page.

8. Jesus did not exist

Here is historian Bart Ehrman again, an atheist who says that he does not know any serious scholar who doubts the existence of Jesus Christ of Nazareth.

9. Santa is not real

One thought on “Comments on Anti-Christmas Myths”