Donald Trump will not be the end of the world but it will not be a conservative administration. As Drew McCoy said, 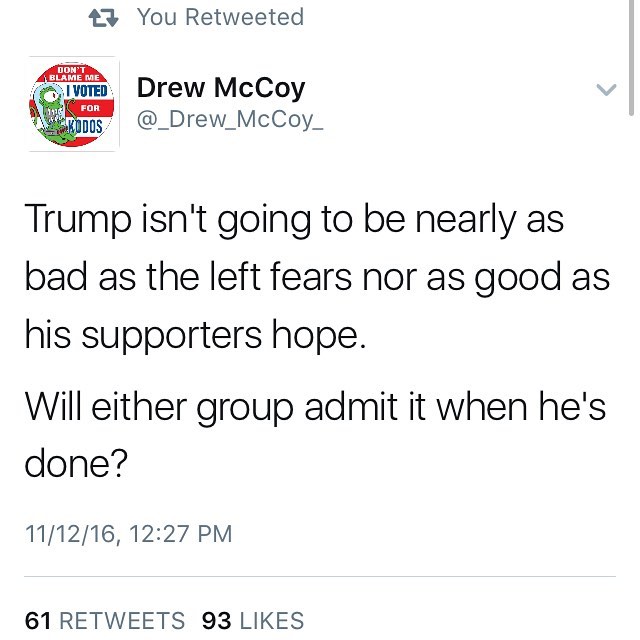 1. Donald Trump will not engage in mass deportation
2. He will advocate for a massive 1 trillion dollar infrastructure stimulus program.
3. If he succeeds in accomplishing his protectionist tendencies, we will see a recession with rising unemployment, consumer prices across the board and declining industrial production.
4. He will increase the debt by at least 5 trillion in his first term.
5. CO2 emissions per capita will continue to fall
6. Russia will push deeper into Ukraine and attempt to take over all or part of at least one Baltic state.
7. He will NOT completely repeal Obamacare
8. His Supreme Court nominees will be moderate swing justice like Anthony Kennedy.
9. He will not drain the swamp nor will he lock her up.
10. No one will die or be put in concentration camps because of his Presidency. He will not be Hitler or Stalin. He will be like any other President. We will look back unto him as a moderate President.
11. He will win reelection in 2020 but his administration will be marked with rising prices, higher unemployment, skyrocketing national debt and scandals of corruption and political targeting.
12. He will spend more time, especially during his transition and early administration, knocking off his opponents and attacking those who did not support him rather than governing. I am inclined to say that it will be more accurate to consider this a Mike Pence administration.

Bonus Prediction: Progress against ISIS will stall because President Trump will end our support for rebel groups which are pushing back against ISIS.