1. If she can not please Bill what makes you think she can please America?
2. It has been reported that during Lewinski-gate she refused to talk to Bill. After 8 months she said she would if he bombed Kosovo.
3. She supports universal health care
4. She wants to raise the minimum wage to 12 dollars an hour.
5. She supported Iraq and regrets not supporting the surge
6. She pushed the disaster in Libya.
7. She has supported 9 of the last 7 wars
8. She failed to properly secure the consulate in Benghazi, to send help when it was under attack
9. She lied about the cause of the Benghazi attack to the American people and the parents of the fallen. She knew that night it was a terrorist attack. She then lied about lying to the parents and the American people.
10. Her State department knew the consulate in Benghazi was undermanned yet they refused security requests. Instead they made the compound rely on the local militia.
11. She has top secret information on an unsecured private server. She originally lied about this. She lied about lying about this.
12. She said she never sent or received classified information. She both sent and received classified information.
13. She discussed an undercover asset on this unprotected server.
14. An official notice was sent out on her behalf warning about using private emails.
15. She said she used the private server to have one device. She had 13 mobile phones and two phone numbers.
16. She said she turned over all her emails to the FBI. She was off by over 17,000.
17. She failed to turn over 30 emails relating to Benghazi
18. She did not find anything wrong with discussing future drone strikes over an unprotected email.
19. She brought her phone into her office which was a secure area.
20. She did not know the letter C on documents meant they were marked as classified. Either she is lying about this or she was remarkably incompetent.
21. She destroyed the Blackberry’s after they were used.
22. She deleted emails after they were subpoenaed.
23. She said on March 4, 2015 that she wanted the public to see her emails. Clearly she did not.
24. The Russian reset button.
25. She sold uranium to Russia
26. She supports Australian style gun confiscation.
27. She wants to overturn Citizens United which would end free speech in politics.
28. She attacked the women Bill Clinton abused to keep them quite.
29. The AP found that more than half of the people Hillary met with as Secretary of State gave money to the Clinton Foundation.
30. Hillary met with representatives of 16 nations who have 170 million to the Clinton Foundation.
31. Under the Hillary State Department, the US sold 29 billion dollars’ worth of F-15s to Saudi Arabia. Prior to becoming Secretary of State, her foundation received 10 million from the Kingdom and two months before the deal they received $900,000 from Boeing, the manufacturer of the jet.

“Under Clinton’s leadership, the State Department approved $165 billion worth of commercial arms sales to 20 nations whose governments have given money to the Clinton Foundation, according to an IBTimes analysis of State Department and foundation data. That figure — derived from the three full fiscal years of Clinton’s term as Secretary of State (from October 2010 to September 2012) — represented nearly double the value of American arms sales made to the those countries and approved by the State Department during the same period of President George W. Bush’s second term.

American defense contractors also donated to the Clinton Foundation while Hillary Clinton was secretary of state and in some cases made personal payments to Bill Clinton for speaking engagements. Such firms and their subsidiaries were listed as contractors in $163 billion worth of Pentagon-negotiated deals that were authorized by the Clinton State Department between 2009 and 2012.

The State Department formally approved these arms sales even as many of the deals enhanced the military power of countries ruled by authoritarian regimes whose human rights abuses had been criticized by the department. Algeria, Saudi Arabia, Kuwait, the United Arab Emirates, Oman and Qatar all donated to the Clinton Foundation and also gained State Department clearance to buy caches of American-made weapons even as the department singled them out for a range of alleged ills, from corruption to restrictions on civil liberties to violent crackdowns against political opponents.”

32. She wants to expand Medicaid
33. She wants to raises taxes on the rich
34. She wants to make it harder for American companies to avoid the uncompetitive US tax environment.
35. Her State Department possible gave diplomatic passports to non-diplomats who donated to the Clinton Foundation.
36. The Clinton Foundation failed to file over a hundred million dollars in foreign donations over a five year period to the IRS.
37. She said the Clinton Foundation would not accept foreign donations while she was Secretary of State. They did.
38. She panders to Black Lives Matters.
39. She opposed gay marriage when that was popular and began to support it after that was popular.
40. If she is elected the bludgeon of sexism will, be used against us for the next 4 to 8 years
41. She thinks grown men should be allowed to use the same bathroom as little girls.
42. She thinks the wage gap is real.
43. She is not only pro-choice she wants you to pay for it and only believes in “some” restrictions only in the third trimester.
44. She is actually a robot sent from the future to troll us. The future is full of dicks.
45. She was supposedly diagnosed with pneumonia and we were not told about it till 48 hours later after denials and excuses over her health incident on September 11th. 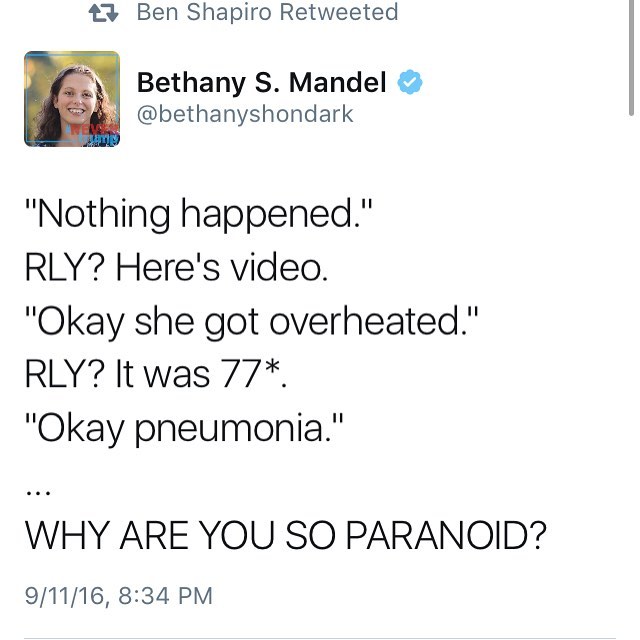 46. She used a child in a photo-op while she was supposedly suffering from pneumonia.
47. She thinks women should be payed the same regardless of the quality of their work. 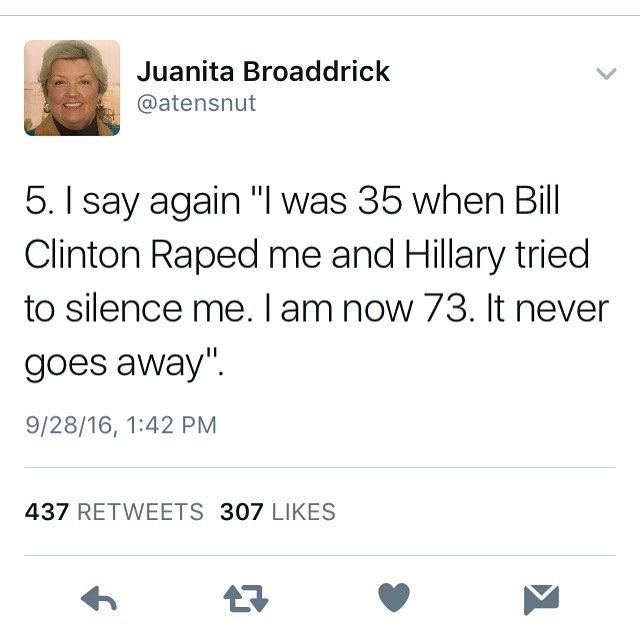 49. She will not release her Goldman Sachs speeches.
50. She thinks tax cuts caused the Great Recession. 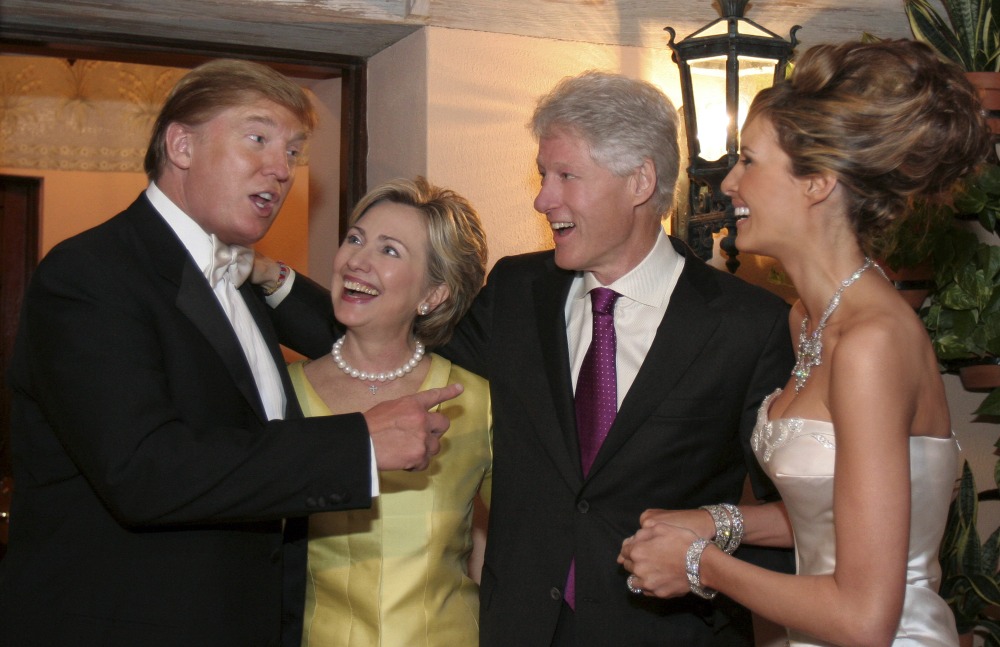 52. She is 68 making it very possible that she could die in office.
53. She has not released her full medical records.
54. She wants to raise corporate income taxes.
55. She ran the Bimbo Eruption Unit.
56. Her camp started birtirism. Anyone who is not as naive as a five year old knows she would have been involved.
57. She will continue the status quo of the Obama administration.
58. She wants an assault weapons ban.
59. She wants to cap out of pocket drug expenses to $250 which would help create a shortage of drugs.
60. She wants a 275 billion dollar stimulus.
61. She wants to use the federal government to put 500 solar panels in place.
62. She wants 6 months mandatory paid leave for both the mother and father.
63. She supports same sex marriage.
64. She thinks religious freedom is “sad”.
65. She is a liberal internationalist.
66. She is a democrat at the national level in 2016. Enough said.

67. She wants to admit 10,000 to 65,000 Syrian refugees.
68. She describes herself as a progressive.
69. She is endorsed by Bernie Sanders.
70. She is endorsed by Barack Obama.
71. She is endorsed by Elizabeth Warren
72. Occupy Democrats shills, er, I mean supports her.
73. She opposed Brexit.
74. The Supreme Court.
75. She supports not letting anyone on the no fly list buy a gun, a trashing of due process.
76. She thinks income inequality is an important issue.
77. She wants free college.
78. She thinks the government is entitled to a portion of what you earn.
79. Her VP is a fake Catholic.
80. She killed Harambe.
81. She supports net neutrality.
82. She has a war on Pepe.
83. She will not call Islamic terror Islamic.
84. She supports affirmative action.
85. She called the entire country racist.
86. “Trumped up, trickle down”. That joke is so awful, it should disqualify her.
87. She wants to impose a tax on high frequency trading which would disincentives investment.
88. She wants to defend the Consumer Financial Protection Bureau.
89. She wants fair housing which is what helped cause the Great Recession.
90. She will defend the Presidents illegal executive action on immigration.
91. She wants to provide “affordable healthcare” to everyone regardless of status. That included people who are here illegally.
92. She believes the myth that one if five women are sexually assaulted on campus.
93. She wants a small donor matching system because we do not have almost 20 trillion dollars in debt.
94. On that note, we are 19.5 trillion dollars in debt.
95. She wants to “boldest investment in good-paying jobs since World War II.”
96. She thinks the government should make that 100% of American households have “affordable broadband” by 2020.
97. She wants to crackdown on outsourcing. Sure that helps the limited segment of the country that lost their jobs but it hurts everyone else.
98. She wants a 60 billion clean energy program.
99. She wants to limit inversions.

100. 1. She wants a “fair share surcharge” because you should be punished for creating too much value.

One thought on “101 Reasons to Oppose Hillary Clinton”